Life is a lot sweeter when you can eat and drink what you like without hesitation.

Many people stay away from sweets not because they like to but because they have to!  As a matter of fact, it is very difficult to avoid foods that look yummy and contain sugar. Most people don’t realize that much of their diet is high in sugar. Foods like tomato sauce, salad dressing, breakfast cereals, yogurt and bread all contain hidden sugars. So, the question is how many of us examine the food we eat each and every time?  And even if we do, won’t we be sacrificing the pleasure of eating?

We all know that sugar can wreck havoc to our bodies when it is out of control. Through long term ignorance and abuses of food intake, it causes some of our organs to stop performing the way they should. Consequently, we develop all kind of ailments and our bodies are crying for external help to recoup the function of proper sugar control.

Fortunately, through years of painstaking research and clinical studies, Ambra BioScience has finally created an amazing product, Lovida GLP-1 Support, that increases the natural production of GLP-1 hormones which are known to help our body with not only sugar control but also with many other health issues that develop as we age. 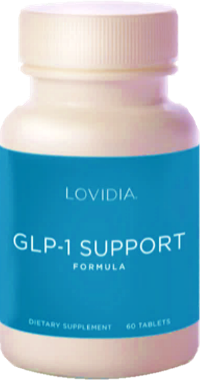 With over $20 million and 6 years in development, and clinically tested in over 1000 adults for safety and efficacy, Lovidia GLP-1 Support is a patented dietary supplement designed by Ambra BioScience to support your body’s own healthy GLP-1 production.  Multiple clinical studies have shown this to be the most comprehensive, safe, efficient and easily incorporated approach to increasing GLP-1.   This is a natural product with Stevia Leaf extract and Berberine as it’s main ingredients.  It is Vegan, Gluten-Free, non-caloric and non-GMO.  It contains no eggs, dairy, wheat, soy, fish, tree nuts, peanuts, shellfish, caffeine, or artificial sweeteners.

What is GLP-1 (Glucagon-like peptide 1)?

GLP-1 (Glucagon-like peptide 1) is a hormone produced in the gut and released in response to food intake.  Studies have found this hormone to be helpful for the proper functioning of various parts of our bodies as shown in the diagram below: 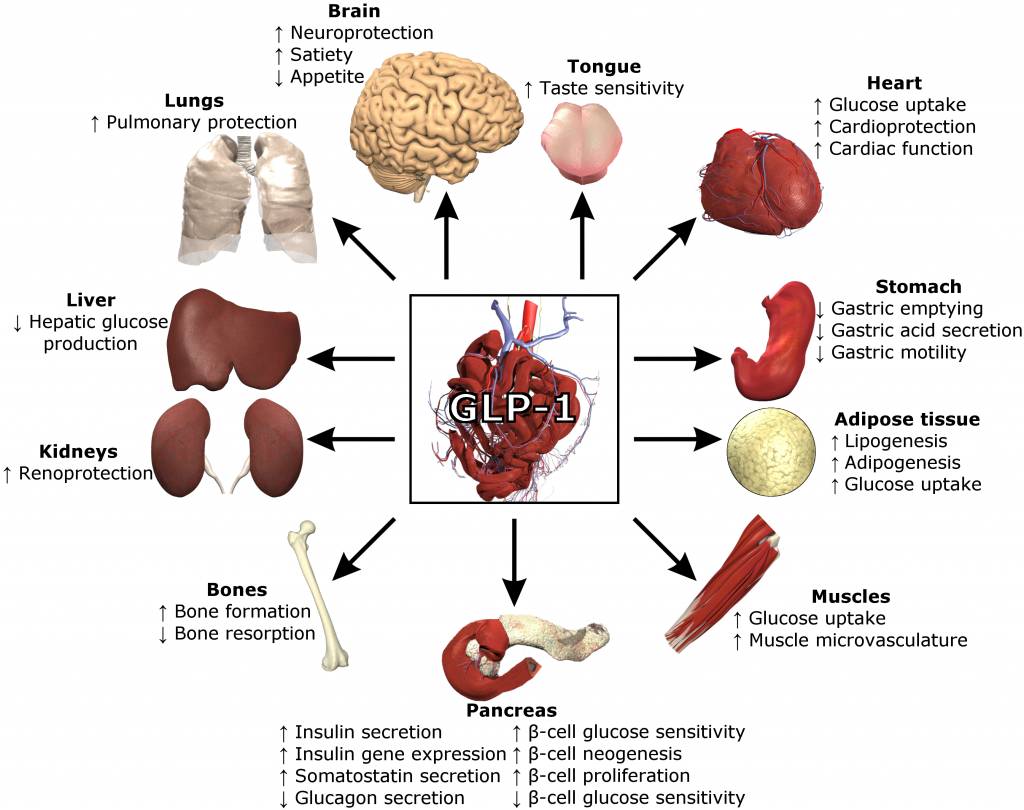 2) GLP-1 is found to delay the speed of digesting food, or stomach emptying. In this way, GLP-1 reduces the speed of glucose intake, making it easy for body to maintain blood sugar level right after a meal until the next meal.

2) GLP-1 produces feeling of satiety, so GLP-1 in hypothalamus reduces the food intake.

3) In particular, a study using chocolate milk has shown that GLP-1 reduces the excitement of eating food, anticipatory food reward, which may result in decrease in appetite and motivation toward food. 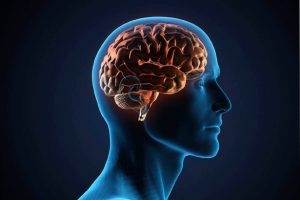 A study on rats has shown that GLP-1R in hippocampus enhanced learning and memory, and also involved in protecting brain from seizures and neuronal damage.

Administration of a GLP-1 activator in patients with Parkinson’s disease showed improvement compared to control patients. Side effects were weight loss and nausea.

It has been proposed that the protective property of GLP-1 receptor activator may be used to improve patients with brain damage such as Alzheimer disease.

GSM formulations, designed to activate the taste receptors on the L-cells in the lower gut to support endogenous release of GLP-1, have demonstrated enhanced release of GLP-1 compared to placebo in randomized double blind, placebo-controlled, clinical studies.*

Gut-brain hormone GLP-1 has numerous functions in the human body to include glucose and energy metabolism (following a meal), neuroprotection and appetite regulation.1

Our GLP-1 support formula features Berberine, an herb highly researched and documented for its role in healthy blood sugar and lipids, in addition to being a clinically established GLP-1 promoter and DPPIV inhibitor.2, 3

*These statements have not been evaluated by the Food and Drug Administration. This product is not intended to diagnose, treat, cure or prevent any disease.

By virtue of its response to food consumption, GLP-1 regulates many functions throughout the body.

Perhaps the most well known function of GLP-1, as evidenced by the growing number of GLP-1 agonist injectable medications coming to market for diabetes, is glucose metabolism. GLP-1 is also a key mechanism of action for metformin. T2DM patients produce lower levels of GLP-1, thus increasing the level of GLP-1 is a promising option. (https://www.ncbi.nlm.nih.gov/pubmed/15561910 )

Functions and benefits include the following:

2) GLP-1 is found to delay the speed of digesting food, or stomach emptying. In this way, GLP-1 reduces the speed of glucose intake, making it easy for body to maintain blood sugar level right after a meal until the next meal. (https://www.ncbi.nlm.nih.gov/pubmed/17498508 )

5) A 6 weeks long administration of GLP-1 to T2DM patients resulted in weight loss, reduction in appetite, slowed stomach emptying, high sensitivity to insulin, and improved beta cells function with no other major side effects. (http://www.thelancet.com/journals/lancet/article/PIIS0140-6736(02)07952-7/abstract)

Why is GLP-1 Important for Healthy Cardiovascular Function?

Cardiovascular complications are the leading cause of morbidity/mortality in patients with T2DM (Killilea, 2002; Mazzone et al., 2008). Epidemiological studies have shown patients with CVD benefit from glycemic and lipid control (AM Committee, 2001; Balkau et al., 2004). Besides its indirect cardiac actions through the control of glucose and lipid metabolism by modulating insulin and glucagon secretion, GLP-1 may exert direct effects on heart and blood vessels via endothelial vasodilation and sodium excretion (Ravassa et al., 2012; Ussher and Drucker, 2012). https://www.ncbi.nlm.nih.gov/pmc/articles/PMC5276855/

Why is GLP-1 Important for Healthy Brian Function and memory?

A key benefit of GLP-1 in the brain is its ability to reduce glucose in the blood. GLP-1 receptor activation has been linked with neurotrophic effects including neurogenesis (1,2) and neuroprotective effects including reduced necrotic and apoptotic (3,4) signaling and cell death (5,6). GLP-1 receptor agonist treatment is associated with protection against a range of experimental disease models to include Parkinson’s Disease (7,2), Alzheimer’s (8,9), stroke (7), traumatic brain injury (3,11), and multiple sclerosis (10).

Memory and learning benefits. A study on rats has shown that GLP-1 in the hippocampus enhanced learning and memory, as well as protected the brain from seizures and neuronal damage. https://www.ncbi.nlm.nih.gov/pubmed/12925848?dopt=Abstract

Why is GLP-1 Important for Weight Management and Healthy Appetite?

GLP-1 influences the nervous system to decrease appetite. A study on fasted rats showed GLP-1 produces feeling of satiety. (https://www.ncbi.nlm.nih.gov/pubmed/8538742?dopt=Abstract ) In particular, a study using chocolate milk showed GLP-1 reduces the excitement of eating food, anticipatory food reward, which may result in decrease in appetite and motivation toward food. (https://www.ncbi.nlm.nih.gov/pubmed/26094857 )

In the stomach, GLP-1 inhibits gastric emptying, acid secretion and motility collectively decreasing appetite. Diabetic subjects treated with GLP-1 receptor agonists often experience weight loss as opposed to the weight gain commonly induced with other treatments. GLP-1 agonist drugs such as Saxenda have been FDA approved for both DM and obesity.

Other benefits of GLP-1